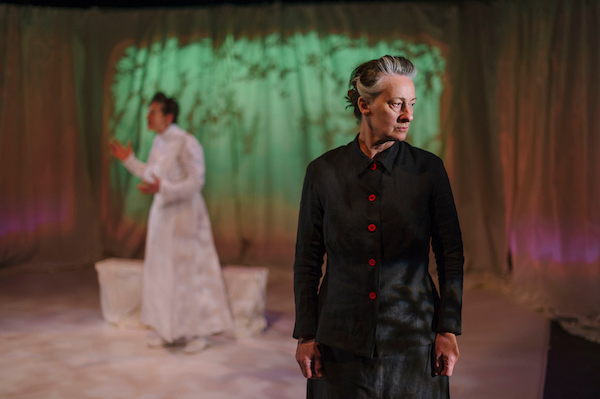 rehearsal pic of The Cause, at Dartington photo by Natalie McGrath
December 14th marks the centenary of the first votes for some women, and it’s the last chance to see ‘The Cause’, Dreadnought South West’s play inspired by an imagined meeting between two great leaders of the women’s suffrage campaign – Emmeline Pankhurst and Millicent Fawcett.

The play has had a fantastic response from audiences during its tour of the South West and North West.

“I thought this imagined meeting was a wonderful way to explore these two women’s lives and campaigns.  Hooray for two female leads and a subversive take on their relationship.  I’m inspired to find out more about the history I thought I knew about.  Thank you!”

This final performance is at Exeter Phoenix at 7.45 on Dec 14th. There’s more info and booking  details here: https://www.exeterphoenix.org.uk/events/the-cause/. After the performance, you can join Dreadnought South West for celebratory events, with a party in the bar and great music by women.

‘The Cause’ considers the impact that a lifetime of political campaigning has on an individual and explores the divide between the violent direct action of the suffragettes and the peaceful constitutional means of the suffragists.

You can see the trailer here:  https://vimeo.com/dreadnoughtsw/thecausetrailer

In just over two weeks we open The Cause in Bodmin and will continue to tour the south west of England throughout the spring. Here are the first set of dates.

For the full tour schedule with links to the venues box offices etc. go to http://dreadnoughtsouthwest.org.uk/the-cause-tour-schedule/

When I travel from the south-west up the M5 beyond the turning for Bristol south and the airport you pass an orchard, row upon row of young apple trees in perfect straight rows at right angles to the motorway so you can see the precision of the planting. I don’t travel up with enough regularity to see the changing of the seasons but I am always taken with the industrial scale of it.

On a train journey from Plymouth to Exeter between Totnes and Newton Abbot there’s an old orchard, ancient gnarled apple trees some leaning perilously, some uprooted by recent gales, yet none seem to be dead roots still clinging on still grasping for life. In no particular rows or order with new saplings for 2015.

A morphing of these two orchards and you have the eponymous orchard in Natalie McGrath’s new play. This orchard is in the imagination both visually and mentally, we don’t have a huge set or projection to show the canopy of blossom, we only have words to paint the picture of the setting. The Orchard is an imagined meeting between two incredible women so, therefore if it’s an imagined meeting then maybe the space is imagined also and by painting the picture with words we can allow individual’s imagination to work allowing their own personal orchards to develop.

Dreadnought South West have been traveling with our Rebellious Sounds roadshow since the beginning of March, starting down in Redruth, traveling through Cornwall and Devon and up to Wiltshire. Every time we have shown the performance we have had a discussion with the audience (see the previous post) and I do mean discussion, some taking longer than the play itself. The conversation has enabled Natalie to cut and refine, to move around and allow issues to be heard in more detail. Whatever the audience feed back becomes part of the text development. We have changed parts around so that both actors have played both parts to see what differences that makes, we have gone from a nod to costume, to just wearing our own clothes. The feedback has been fascinating, all enthusiastic and constructive as if knowing that their thoughts will be used dramaturgically the audience are more animated in their discussion and, as the time goes on they start to think deeper about why they think or believe something. The play deals with politics, equality, pacifism versus militancy and friendship so this has also stirred up some emotions in the room particularly with a view to voting. One audience member claimed he had never voted only to be advised by another audience member that that was the wrong action to take if you want to make a point. Younger members of the audience have also been extremely eloquent in their views and one even wrote a review here. Many discussions, once broken up so people can get home, have carried on in little huddles so that you want to split a little bit of yourself into each group to get the continued thoughts, some of which would not be aired in a more public arena. This has all been an incredably interesting process for the writer as everything has been geared to the text and this is where now, as a performer I want to fly, I want to take the text to another level, to play the subtext, to find moments within the characters minds and thought processes where each other knows what the other might say. We have two more development performances on the 24, 25th of this month and two days in the rehearsal room with the script. This time we are expecting something bigger than just a tweak or a cut speech, this time Natalie is doing something ‘big’ and we don’t know what that will be. I do know that The Orchard at Plymouth will not be The Orchard that played Exeter, or Bodmin, or Teignmouth. In that respect each audience has been witness to a unique night at the theatre, never to be repeated in that mode again, and I don’t just mean the ephemerality of live performance but a different text to speak each time. Yet for the next two performances I have no idea what the text will be and that, my friends, is truely exciting.

and Appley Pavilion Somerset on 25th April @7.30pm – tickets on the door, contact avrilsilk@aol.com for information