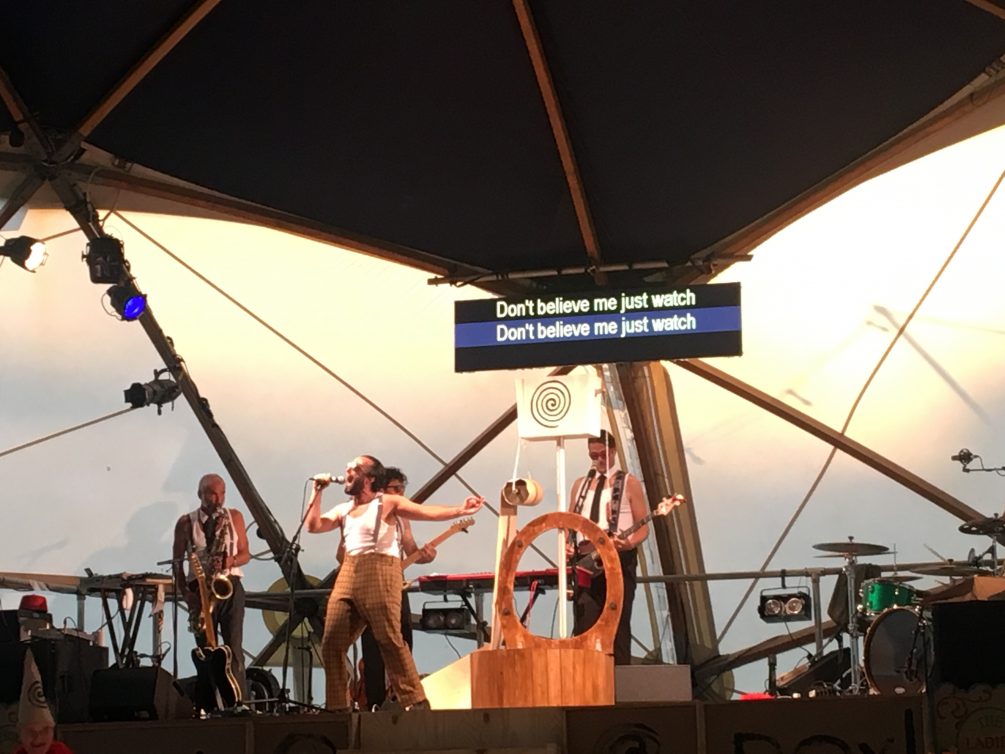 At the 2017 Edinburgh festival we saw Middle Child’s All We Ever Wanted was Everything late one night at Summerhall, in a circular tent and it was packed. Gig theatre, (a mash up of theatre [new writing] and an [original] music gig) as it is termed has brought new young audiences into the theatre and you can see why, there’s an energy that goes beyond the norm and it’s infectious.

Last night we headed to the Lost Gardens of Heligan to another circular tent for the start of Kneehigh’s Asylum summer season which started with Ubu Karaoke. This was a retelling  of Ubu Roi by Alfred Jarry and modern classic songs that aid the telling of the story to a twenty-first century audience. The title may imply that people have to get onstage and sing along but that is a false assumption, the cast always lead the songs, which are surtitled and the audience sings along as one. In fact from the start, the usual rules of theatre are left aside. Gone was the 15-20 minute interval and we were told there was a 5 minute breather, we could come and go throughout the show, the doors of the tent were always open and the bar alongside the stage was available throughout the performance. The audience were sitting, standing and dancing; even partaking of games during the Ubu Olympics but never was anyone asked to do anything they didn’t want to do. The whole event was relaxed for everyone and the audience loved it. The analogy of Ubu, who gets to be king by a devious route, wan’t lost on anyone in the audience and nothing had to be spelt out for us to see the modern day equivalents. The fact that it was so relevant to what is happening now made people sing louder, sing like no-one was watching because no-one was watching, we were all partaking. When Ubu was first produced in 1896 it caused a riot and last night the riot was contained within the audience as they formed armies to follow their leaders. If you are on holiday in Cornwall or live in the south west GO. This isn’t gig theatre, its not even karaoke theatre, Knee-high call it ‘promenade musical’ but its something deeper and at this moment in time its obvious that people need it.