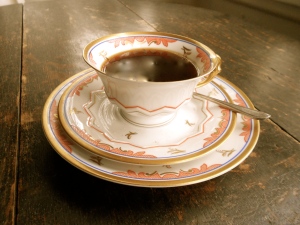 When I first performed Coffee with Vera it was inside the vestry of the Plymouth Synagogue. My decision to use the vestry rather than the synagogue was twofold. The synagogue can be accessed through an appointment to view with a guided tour, conducted by the caretaker. It can be considered a performance in itself, which gives a particular reading of the site. This is very much a male dominated space where the men perform the service and the women are seated upstairs away from the males. This is, according to Rabbi Aaron Moss, so that both male and female can focus on their prayer away from the opposite sex, an opportunity to be with your ‘true self, to communicate with your soul’ (Chabad.org: online). Roberta Mock states that ‘women were (and still, in traditional Judaism, are) “exempt” (that is, excluded) from most religious learning, prayer, and ritual’ (Mock, 2007:2). Secondly, the vestry is a lived in space; the building houses two flats, one for a rabbi and one for a caretaker and there is a kitchen to make refreshments. ‘Women’s sphere of influence is defined exclusively in halacha, or Jewish law, as “domestic affairs”’ (Mock, 2007:2).

COFFEE WITH VERA
Saturday 9 May, 3pm to 4pm (in the vestry)
Tuesday 12 May, 11am to 12pm (synagogue)
Sunday 17 May, 11am to 12pm (synagogue)
Tuesday 19 May, 7pm to 8pm (synagogue)
Synagogue Chambers, Catherine Street, Plymouth, PL1 2AD
Watch Ruth Mitchell’s award winning performance of ‘Coffee with Vera’ in the Plymouth Synagogue, followed by coffee and cake in the Vestry with “Vera” herself.
Admission is free. Donations are welcome. Booking is essential via 07753 267616 or phccaretaker@yahoo.co.uk